Published by Salou Travel Blog on

Salou has a Mediterranean climate that is ideal all year round, a lot of sunny weather, warm Summers and mild Winters.The average temperature in the Summertime and peak season in Salou from June to September is around 25 degrees (77 Fahrenheit). August is the warmest month with the coolest month being January. As Salou is on the coast there is often a welcoming Mediterranean breeze that can be a little stronger in the evenings. If your packing for your holidays during the cooler months don’t forget your coat as it can get chilly in the evenings.

Here is a detailed average temperature and rainfall monthly breakdown that may help you for planning your holiday.

On average January is the third driest month of the year in Salou. Around 35mm rainfall is spread approximately over 12 days so it is a reasonably dry time to visit.Temperatures can reach 15 degrees with nighttime feeling a lot cooler falling to 5 degrees. There is an average of over five hours sunshine per day.

February is reasonably dry and often mild in Salou. It is the third coldest month as it is during Winter but can reach a maximum of 16 degrees. Nighttime can drop as low as 4 degrees. Being the second driest month with an average of 30mm rainfall it is still a reasonably dry time to visit and possibly enjoy over six hours of sunshine per day.

March is Springtime in Salou so it is mild and reasonably dry. Maximum temperature can reach 18 degrees dropping to approximately 7 degrees at night. It is the fifth driest month of the year in Salou with a possible 41mm of rain but spread over 10 days with 7 hours daily sunshine.

April can be mild and reasonably dry in Salou. It is typically the sixth coldest and also wettest month of the year with daytime temperatures reaching an average of 20 degrees but dropping to 9 degrees at night. Average rainfall is 47mm spread over 10 days. There is approximately 8 hours of sunshine per day.

Salou Weather In May

May is the forth wettest month of the year. On average there is around 54mm of rain typically spread over 10 days with approximately 9 hours of sunshine so it is a pleasant time to visit. Daytime temperature can reach an average of 23 degrees and drops to 12 degrees at night.

Salou during the month of July is usually warm and dry. Being one of the Summer months it can reach 30 degrees a day and a nighttime temperature of 19 degrees. There is approximately over 11 hours of sunshine daily. July being the driest month of the year has very little rain, possibly 18mm spread over 5 days.

August is the hottest month in Salou with average temperatures reaching 30 degrees with nighttime falling to 19 degrees. It is also reasonably dry with around 48mm of rainfall spread over 7 days but this varies considerably. There is nearly 10 hours of daily sunshine.

September is typically warm in Salou with temperatures reaching 27 degrees as it is the third warmest month in the year. At night the temperature can drop to 17 degrees. On average this is the second wettest month of the year with an approximate rainfall of 71mm spread over 8 days, but as with every month this varies considerably. There is over 8 hours of daily sunshine.

On average October can be the wettest month of the year with around 86mm of rainfall spread over 10 days, so it is advisable to take a raincoat if visiting during October. There is an average of almost 7 hours sunshine daily. Temperatures can reach 23 degrees but nighttime it falls to 13 degrees.

November can be mild and reasonably dry in Salou. It is the fifth coldest month of the year with cooler temperatures of 18 degrees daily and nighttime dropping to 8 degrees. It is the third wettest month with an average rainfall of around 56mm spread over 10 days but daily sunshine of approximately 5.5 hours.

December weather in Salou is typically dry and cool as it is the second coldest month of the year. Daytime temperatures can reach 15 degrees and falling to 6 degrees at nighttime. Being the sixth driest month there is an average rainfall of 42mm spread over 11 days with over 5 hours of sunshine. 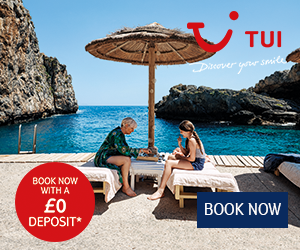 Overall Salou is an ideal destination all year round as the temperature is not unbearable. As with any holiday there can be a passing storm which usually does not last very long and dries up quickly. There is also the possibility of a heatwave in the Summer months which can bring the temperature up in the high 30’s. During June and July it boasts up to ten hours sunshine daily.

Check out our homepage for more information on this fabulous holiday destination or check out our latest posts below:

Here is a breakdown of the average monthly sea temperatures.

Below is a short video of the sea last October in Salou.

Loved watching the sea on a rare stormy day in Salou. Storm passed quickly and it was still mild even with the coastal breeze.

A big attraction in Salou is its beautiful fountains with shows at night during peak season. There are 3 fountains along the main promenade. Cybernetic Fountain This is located in Jaume I promenade near the Read more…

Before your trip or during your stay in Salou it is useful to have information and to make the best of your holidays. Here is a list of some churches, tourist offices, medical clinics, chemists, Read more…

We use cookies to ensure that we give you the best experience on our website. If you continue to use this site we will assume that you are happy with it.Ok